The nominees, which were chosen by the entire comic creating community, reflect the wide range of horror material being published in print and web comic form today. Avatar Press was nominated for the following categories: 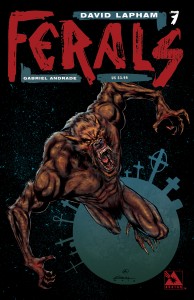 Best New Series (Fans Will Decide the Winner):Ferals
Best Web Comic:Crossed: Wish You Were Here (www.crossedcomic.com)
Best Writer:
David Hine (The Darkness, Night of the Living Dead: Aftermath, Crossed Badlands)
David Lapham (Ferals, Crossed Badlands, The Strain, Caligula)
Fans will decide the winner of the Best New Series Award – so be sure to visit www.ghastlyawards.com to vote for Ferals!
Fan and Creator voting closes January 31, 2013 and winners will be announced in February 2013. Please vote and forward this article to all your horror fans!
Named after acclaimed comics creator “Ghastly” Graham Ingels, the awards are now in their 2nd year. Created to honor excellence in Horror Comics, every comic creator had a say in who the nominees were by nominating their favorites throughout the year.
Postado por Gabriel Andrade Jr às 18:36