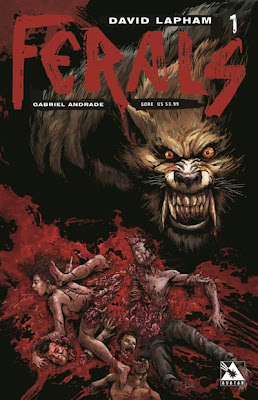 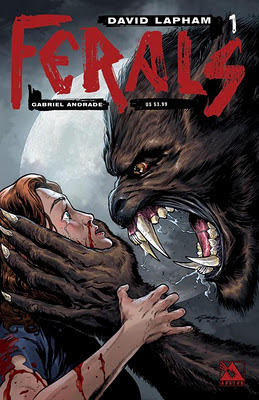 I'm very excited with this work. I love police stories and this book is amazing. Work with David Lapham is wonderful.

Media Release -- Comic book and graphic novel publisher Avatar Press proudly announces the latest addition to its expanding line of horror fiction with the ongoing monthly FERALS series, written by genre legend David Lapham (Stray Bullets, Crossed 3D). Featuring the full-color artwork of Gabriel Andrade (Lady Death), FERALS is the carnage-filled tale of an idyllic town besieged by a new breed of werewolves… a new culture, even. The debut #1 issue is solicited through Diamond Comic Distributor's November Previews catalog for release at comic retail shops in early January 2012.
FERALS #1 introduces Officer Dale Chesnutt, a lawman with a big, bloody problem. Slaughtered civilians are turning up in the sleepy town of Cypress, and the burden falls on him to end the slaughter. But no sooner does he begin his investigation, then he finds himself violently drawn to a sexy, mysterious woman… and a vicious creature strikes again, this time at Dale's own family.
With its noir feel and small town domestic setting, FERALS brings writer David Lapham to his roots as the creator of the critically acclaimed Stray Bullets series. "It starts with small town people with their own little Peyton Place dynamic and a small town cop named Dale Chesnutt, who is a charmer, a womanizer, a screw-up," says Lapham. "He suddenly is hit by the 'stray bullets' and finds himself in a whole new world that's plenty dark and twisted."
With popular supernatural dramas like True Blood and American Horror Story updating horror concepts like vampires and ghosts, FERALS will bring the legendary werewolf mythos into a modern context, but with a radical new slant. According to Lapham, "This isn't a take on the mystical werewolf, full moon and all that. The classic werewolf is about a monster, a monster story. FERALS is a drama and a noir where being feral is a very real thing. This is about a different kind of person. A person who is feral could be your neighbor and you wouldn't know it; he doesn't change when he's pissed or when the moon is full. Ferals are real and have their own culture, their own thoughts, history, and plans."
For the past two years, Avatar Press has happily been the home to David Lapham's horror tales, including the supernatural Caligula series and his contributions to the runaway success franchise Crossed (including miniseries Crossed: Family Values and Crossed: Psychopath, plus the record-setting bestseller Crossed 3D), wherein the world is overrun by madmen. While his reputation for twisted storytelling was cemented with Avatar's fans, Crossed devotees especially should expect a completely different feel from FERALS. "That's the real trick – not just make Crossed with fur. FERALS ongoing and we're following certain characters that we'll come to know and see evolve through the series. It's about what happens when you stick your nose into other people's business. This is about live and let live …or else, die horribly."
As with many of their comic books, Avatar Press will offer several different cover editions of each FERALS issue, providing fans with the freedom of choice for which graphic, visceral images they want to collect. All cover artwork for issue #1 will be provided by series artist Andrade.
Postado por Gabriel Andrade Jr às 19:35